Adrian Tripp, CEO of the European Business Awards said: “This is a significant achievement and LG Sonic is an outstanding leader in their field. To be chosen as a National Winner means you show great innovation, ethics, and success and are one of the best businesses in Europe.” The European Business Awards is now in its 12th year and its primary purpose is to support the development of a stronger and more successful business community throughout Europe. This year it considered over 120,000 businesses from 33 countries.

Worldwide, algal toxins of all types may be responsible for as many as 60,000 intoxications. Harmful Algal Blooms (HAB), can affect aquatic life, human health, and local economies. Due to accumulated biomass, it severely lowers oxygen levels, creating “dead zones” in water bodies, which leads to high mortalities of fish. Toxins from cyanobacteria can potentially cause illnesses, paralysis in humans, and some are even suspected to be involved in the occurrence of liver cancer. The most common practice for fighting toxic algal blooms are harmful chemicals. Those, however, are harmful to the environment and often produce unwanted side effects.

The sound waves developed by LG Sonic target and neutralize the algae, preventing them from growing and evolving to a blooming stage. They have been tested by various universities and are proven to be safe for humans, fishes, and other aquatic life. LG Sonic products effectively control algae and biofouling in lakes, reservoirs, treatment plants, and other applications. Over the last decade, more than 10,000 products have been successfully installed in 54 different countries. The company already won multiple innovation awards including the WssTP Water Innovation Award, Aquatech Innovation Award, BlueTech Technology Innovation Award, and the Shell LiveWIRE Award. 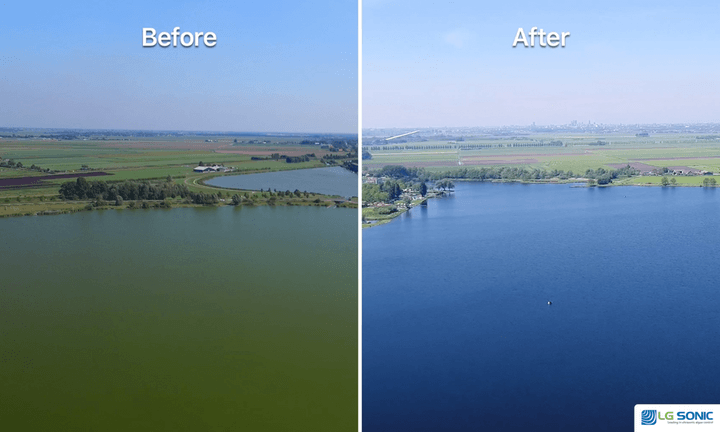