Today, 10 July 2018 the Water Alliance has announced the ten water technology companies that are battling for the prestigious Water Alliance Innovation Stimulation Award (WIS) 2018 during the European Water Technology Week (EWTW: from 24 September to 27 September in Leeuwarden). The nominees are: CirTec, Bronwater Zuivering Nederland, FORU-Solution, SolteQ Energy, Hydraloop International, Mijn Waterfabriek, SEMiLLA Sanitation Hubs BV, WLN, Royal Eijkelkamp and SenZ2. The companies will present their innovations to the jury and an international audience during two rounds of pitches in September. There is a lot riding on the outcome: not only will the participants be thrust into the international spotlight, but they also stand to win a marketing and PR package worth €10,000.

The WIS Award is part of the European Water Technology Week (EWTW), which will be held between 24 and 27 September in Leeuwarden. A full international programme has been prepared in the context of Leeuwarden-Fryslân European Capital of Culture 2018, and includes a large scientific congress, an international business symposium, matchmaking sessions and numerous tours and network meetings.

The WIS Award kicks off on Monday, 24 September with a preliminary round in the City Theatre de Harmonie, where all ten companies will present their innovations. The final will follow on Wednesday 26 September, with the winner being announced directly. The final will be held at the WestCord WTC Hotel Leeuwarden, the principal backdrop for the EWTW event alongside de Harmonie and WaterCampus Leeuwarden.

The organiser Water Alliance has the core task of stimulating the national and international activities of Dutch water technology companies. As a result, the WIS Award is focused both on brilliant innovations and on their market potential. Each year the jury, chaired by Prof. Cees Buisman, ask critical questions that concentrate on these qualities.
The crop of 2018 looks to be highly impressive. The nominees and their innovations are introduced very briefly in the supplement to this press release.

CirTec from Purmerend presents the CRESCENDO, an innovative evaporator for the purification of many fluids (including water). The company maintains that its CO2 emissions are significantly lower than that of conventional evaporators.

Bronwater Zuivering Nederland offers ‘The Runoff Purifier’. The rainwater that falls onto the paved surfaces of a commercial terrain can be purified in such a way that it is directly available for industrial use, without first having to store it in manure silos or cellars. This saves time, transport and water consumption. An initial pilot has been running successfully in Germany and the company feels that the product has enormous international potential.

FORU-Solution by entrepreneur Koos Tamminga (Harlingen) will be presenting the FORU 70 at the WIS Award; a rounded and buoy shaped ‘skimmer’ that can remove oil from the surface of (sea) water. According to FORU-Solution, this piece of equipment performs the task more simply and efficiently that all other existing solutions, and is suitable for every harbour in the World, as well as oil refineries and oil platforms.

Entrepreneur Herre Rost van Tonningen of SolteQ Energy presents the FreshWaterMill. This is a hydraulic windmill, that transforms wind energy into high pressure that can power a desalination unit. This delivers both energy and clean water. According to the company, this represents a tremendous opportunity to provide numerous arid and/or poor areas around the World with clean drinking water and energy, without having to resort to expensive water and electricity distribution systems. “This is highly economical for agriculture and the tourist industry, and it could also help check the explosive growth of people emigrating from poor areas to the cities”, according to Rost van Tonningen.

The nominee Hydraloop International also has a solution for the demand for clean water for the rapidly growing world population. Hydraloop is an innovative in-house water-recycling system that collects, purifies and disinfects shower, bath and washing machine water. The company claims that it can save large quantities of water by recycling 85% of domestically used water. This fills a gap in the market, according to marketing and sales manager Sabine Stuiver. “We are convinced that, in twenty years’ time, no home will be built without its own inbuilt water-recycling system. So there will be an enormous market to supply.”

Mijn Waterfabriek from Hardenberg will present in September the Drop2Drink unit; a purification system that can render both unreliable drinking water and rainwater microbiologically safe and therefore fit for consumption. The ease of use and the low cost of the system combine to make it an attractive solution anywhere in the World, according to entrepreneur Johan Bel.

SEMiLLA Sanitation Hub has developed a system that can purify human waste fluids and turn them into compost that can be used for growing vegetables. At the same time, the water that is left over is clean enough to be disposed of safely, or to be used for irrigation. ‘The Hub’ is an ideal solution for areas where emergency relief is needed, but entrepreneur Peter Scheer stresses that it can also be useful for festivals or for buildings that are not connected to the sewer system. This broad gamut of applications and a growing world population encourages Scheer to look forward a bright future for his innovation.

The company WLN from Glimmen can already claim the prize for the innovation with the longest name. The ’Fast Detection of Faecal Contamination Food Quality Water’ offers an innovative molecular technique (more exactly, DNA and RNA techniques) that allows drinking water companies and, for example, the food industry, the opportunity to test, in a very short space of time, for the presence of undesirable bacteria. The company claims to have reduced the test time using older test methods of about 45 hours to a mere 4 hours. WLN foresees enormous market potential, especially as the Dutch government has officially endorsed the metering method from April this year.

Fons Eijkelkamp of Royal Eijkelkamp has similarly high expectations. The Water Access Point (WAP) makes it possible to provide remote rural areas with safe drinking water without a connection to a water supply network. A WAP is equipped with four solar panels that provide electricity to an immersion pump. The system is fraud-proof and can be used to pump water from a reservoir. This can even be paid for using a remote digital payment system. According to Royal Eijkelkamp, this provides local operators of water points in developing countries the opportunity to develop their independent business skills.

SenZ2 by entrepreneur Peter Hiemstra from Waalwijk will bring the Wireless Level Radar to the WIS Award. This ingenious radar technology makes it possible for industry as well as government bodies around the World to monitor water levels remotely and conveniently, as well as testing the quality of surface water, waste water, groundwater and liquids in industrial tanks, barrels, wells and reservoirs. This is an extremely accurate measuring method that is reliable and flexible, that can be offered for a low price, according to Hiemstra. He believes that the product has tremendous market potential. The strength of the product lies in its simplicity: the metering technology can be installed by anyone, anywhere in the World, and can be operated from anywhere. 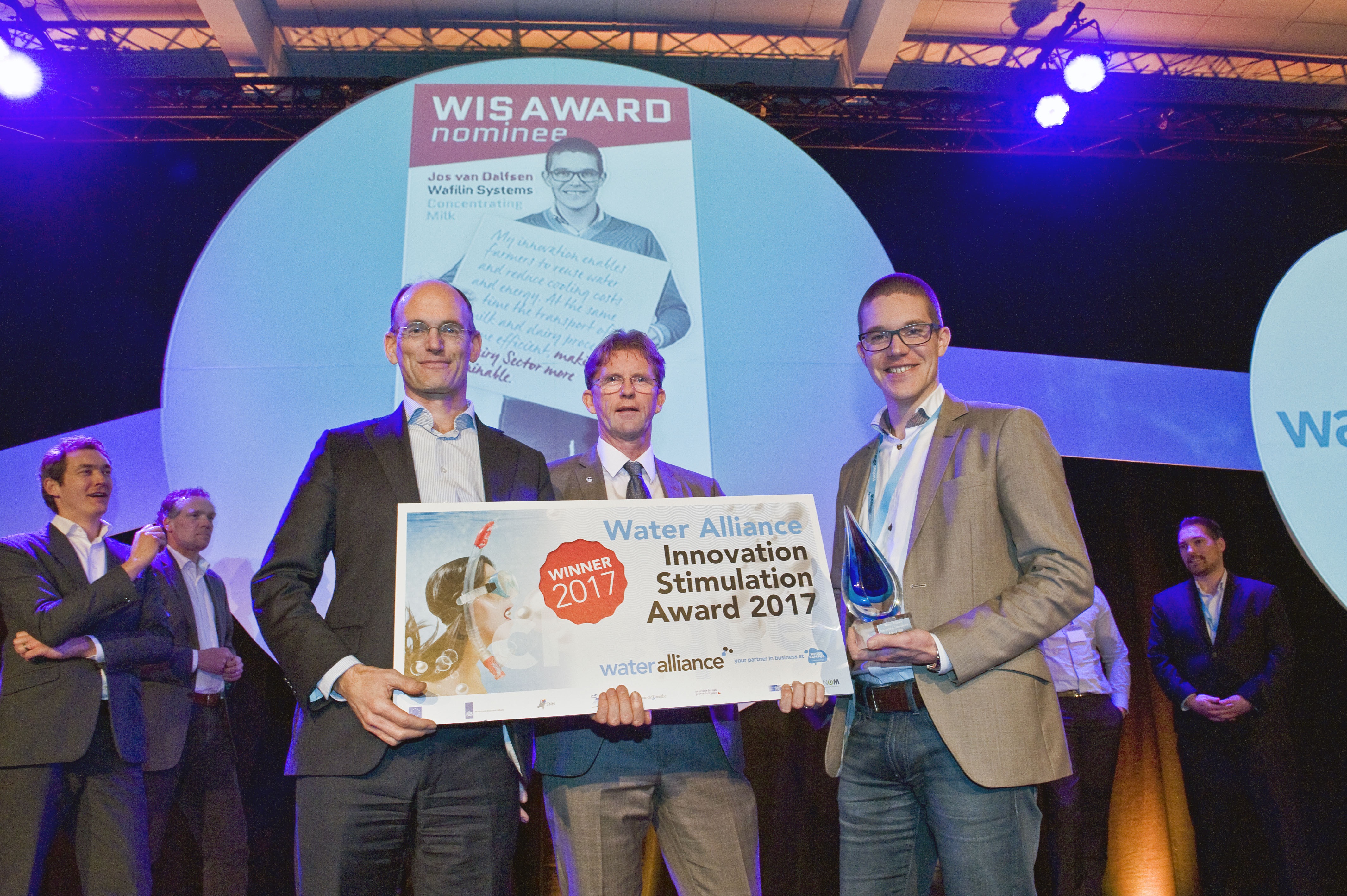