Hydraloop, the intelligent grey water recycling system that can be used remotely via a phone app might just be what water-saving households in Cape Town want.

With just a tap on a phone, the Hydraloop lets householders redirect the grey water they might have, for instance, programmed to go to the garden, to the washing machine instead. The sophisticated system was developed by Dutch entrepreneur Arthur Valkieser who had the new machine on exhibit at the recent Water Institute of South Africa conference in Cape Town.

His machine, which won an innovation award at the International Water Summit in Abu Dhabi in January, is about the size of a large fridge. It is also one of ten nominees for the prestigious 2018  Water innovation Stimulation award that will be awarded during the European Water Technology Week in Leeuwarden, Netherlands in september.

Valkieser says Capetonians, on a limit of 50 litres of water a person a day, can ramp up the amount of water they have at their disposal as the system recycles 95% of grey water from showers, baths, hand basins and washing machines. And if there is too much grey water in the system, it automatically overflows into the sewers.

Valkieser used no new technology, but put existing technology together to create the Hydraloop system. It has two main differences from other grey water recycling systems.

No chemicals
“First we made it look nice, so you can put it anywhere inside your house, and second, we used a method to clean the grey water so that the cleaning is automatic. It is designed to clean itself. All other grey water recycling systems use filters or membranes and you need to change these or clean them. And we also have an automatic way to clean the water, so there is no smell from the grey water,” Valkieser said.

Grey water has a lot of organic material in it – hair, skin, grease and plenty of bacteria – so after a while it starts to smell.

Valkieser uses no chemicals in his system. The water from a household’s baths, showers and washing machine goes into the Hydraloop, where hair, skin, soap and other floating dirt is trapped in a cylinder in the central tank. This overflows into a pipe connected to the sewers, and gets rid of 95% of the floating dirt.

“Then starts the real treatment of the water. The machine generates millions of air bubbles and all the remaining suspended solids attach themselves to the skin of the air bubbles, and this is automatically skimmed off and discharged into the sewers,” Valkieser said.The machine has an internal ultra-violet light that kills bacteria, and a bio-reactor that cleans the water further.
The machine’s pump, which makes a hum about as loud as a fridge, distributes the cleaned grey water around the house to the lavatories, washing machine, garden, swimming pool – or to a storage tank outside.

Each machine is connected via Wi-Fi to Valkieser’s company in the Netherlands, where their server monitors the proper functioning of each Hydraloop. The household sets the machine, to supply water to the loos first, for instance, then the washing machine, then to the garden.

The machine comes with the option of a phone app that allows a user to make or update a list telling the machine where a user wants the water to be distributed. Householders can also receive information, such as how much recycled water was used, via the app.
“The Hydraloop works without the app, but it’s an option if you want it,” says Valkieser.
If all the grey water is used, the system will automatically switch to mains, and once any grey water becomes available, it will switch back.

Running out of water
It is primarily aimed at new housing developments, so it can be plumbed in with the construction of the house.
Valkieser, who has a master’s degree in design, has no background in engineering. He started his working life as a cameraman, and over the years built up a successful media company in the Netherlands that he sold 15 years ago.”Then I had time to enjoy life. I also had time to sit and think.”
One of the issues that occupied his mind was the problem of the world’s water supply, and how the rapidly growing global population was putting increased demands on the system.
“We are running out of our most precious resource, so we have to change the way we use water. Using it once is not an option anymore. I wanted to help solve that problem.”I believe in 20 years’ time no house will be built anywhere in the world without a water recycling system.” 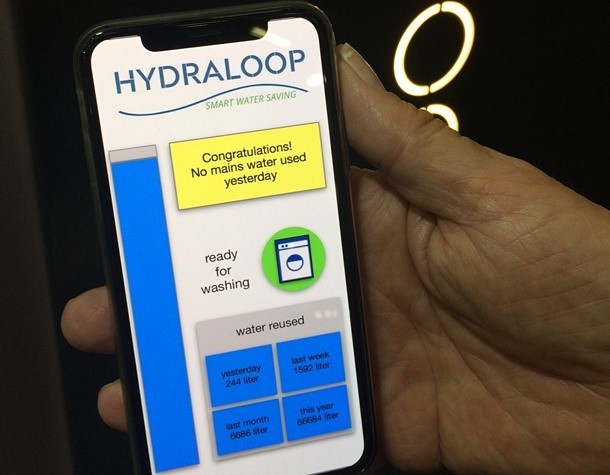