More than 40 parties from 11 countries took part in Water Match 2016 on 9 February. Businesses, knowledge institutions and government authorities, all looking for 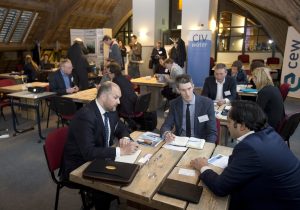 opportunities for international cooperation, contacted one another in Leeuwarden by means of short one-on-one conversations. The event was organized by Water Alliance and the Enterprise Europe Network (EEN). Most of the participants came from abroad. In addition to the Netherlands, there were one or more representatives from Spain, the United Kingdom, Germany, Greece, Argentina, Belgium, Hungary, Portugal, Italy and Romania. They met up at Johannes De Doper  Business Centre.

The dating was not a random affair. Beforehand, each of the participants had made up a profile on the website of Water Match, a side event of the EIP Water Conference, on Wednesday, 10 February in Leeuwarden. These descriptions were used by the participants to invite potential partners to become better acquainted with each other in Leeuwarden. The Water Match organisers planned the dating sessions and provided each participant with a personal schedule. Firstly, there was a joint informative session about European programmes to stimulate small and medium-sized enterprises and subsidy opportunities such as Horizon 2020, and then at 1pm the participants huddled up together for a good chat. The dates lasted for a maximum of 20 minutes, so they were not overly long, and with the session lasting until 5pm, many of the participants managed to fit in eight conversations.

The reactions were very enthusiastic. “I’ve held five conversations, and four of them are going to be followed up”, according to Rahmat Peijpers, a business developer at Wageningen UR, when the afternoon was still only at its halfway point. “They are from Argentina and Spain and other countries, and we’ve been discussing sales and buying as well as potential partnerships.” Chris Drayson, the director of Red Media from Great Britain, also left the hall grinning from ear to ear. “Our business is removing phosphates from water, to be used in agriculture. I’m particularly excited about a conversation I had with Brightwork from the Netherlands, who have come up with a similar idea. They should be able to integrate some of our cheaper techniques into their own.”

Organiser Matthijs Plijnaar of Water Alliance was very satisfied after the event. “Matchmaking is highly effective. The fact that the Water Match participants make their own selections for a date increases the chance that there will be further cooperation between them. It would be great if there were to be a follow up to Water Match in 2017, just as there will be for many of the dating sessions that were held today.”