The water technology company Semiotic Labs has won the WIS Award 2020 with its innovation SAM4, a ground-breaking condition monitoring method. The lead juror Cees Buisman (Wetsus) announced the winner during the online Grand Finale, which was streamed globally on Friday the 18th from Studio Z in Leeuwarden. Semiotic Labs has developed the SAM4 monitoring method specifically for pumps. The system collects current and voltage data, and analyses these waveforms using artificial intelligence-algorithms to detect upcoming failures well in advance.

Semiotic Labs can predict when and why machines like wind turbines, but also manufacturing equipment in factories or the conveyor belts in Schiphol will fail, especially when they are equipped with an electromotor. “We look at the heart of the motor, more traditional technologies just look at the outside.” says founder Simon Jagers. The market outlook for SAM4 from Semiotic Labs looks very promising. It promises innovative and cost reducing solutions, for any company which has to rely on their motors running all the time. This is the case in the process industry but also in the shipping industry.

The winner of the WIS does not only receive a prestigious award, Semiotic Labs also receives 10.000 euro for international marketing support. Winning this award can accelerate international growth to a whole new level, previous winner Hydraloop is a testament to that.
The producer of small scale water recycling systems (for homes and offices) received immense requests from both media and potential customers after winning the WIS Award (also winning many other awards). 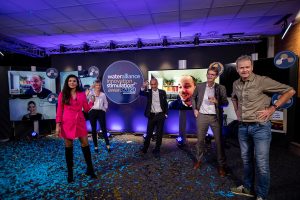