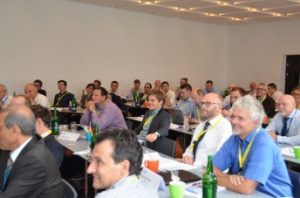 Waste Water and reuse – mankind’s big challenge for the years to come: This was the summary of Pietro Lori’s speech for second GF Water Technology Summit which took place from 17 to 18 September 2015 at the Klostergut Paradies, Switzerland. Approximately 40 water treatment experts from six European countries listened to latest developments on topics such as micropollutant removal in sewage plants or nutrient recovery.Roland Gröbli, Director of the Georg Fischer Clean Water Foundation, thanked GF Piping Systems for the donation of the attendees’ participation fees of total 10.000 CHF to the foundation. This donation will be used for projects giving people in remote areas access to safe drinking water. The event started on Thursday afternoon with some opening words by Pietro Lori, Head of GF Piping Systems, emphasizing the importance of further development in waste water treatment technologies and GF’s special dedication to the water treatment business in general.

Micropollutant removal from the effluent of municipal waste water treatment plants into rivers and lakes. There Dr. Adriano Joss from the EAWAG Zürich showed clearly the impact of pharmaceuticals on aquatic life and measures which will be taken against in Switzerland by the government and the sewage plant operators. This was followed by a presentation from GE water & process technologies explaining how in a technical scale micropollutants may be removed by simultaneously dosing of powder activated carbon and the use of ultrafiltration membranes.
Automation developments in the industry in general and the water treatment business in particular. Dr. Eckhard Roos from German Festo AG & Co.KG explained the advantage of modular treatment units with modular process control systems in order to have a simple opportunity to add or remove parts of the plants. Then Siemens AG automation department gave a speech regarding data management over the whole life spam of an industrial plant.

The Friday session was dedicated to advanced or smart solutions for waste water treatment and reuse plants. Opened by Mr. Götz Lange from memsys GmbH displaying what is thermal membrane distillation and how it may be used for the treatment of highly polluted waste waters e.g. from fracking or for the further concentration of brines and acids generating pure water as a byproduct. The second presentation was held by a cooperation of Royal Haskoning DHV from the Netherlands and the WABAG Wassertechnik Switzerland. RHDHV has developed an advanced biological treatment process for municipal and industrial waste water which is far more cost efficient for the plant operation due to the fact that energy consumption and sludge production are significantly reduced. Last but not least keynote was from the Dutch anaerobic digestion specialist company Paques B.V. . They showed how they are able to recover nutrients like phosphate from waste streams with their smart PhosphaqAnnamox process directly as fertilizer which may be reused in agriculture.