During pilot research in Växjö, Sweden, we gained valuable information on the abilities of Advanox™ by Van Remmen UV Technology and of MicrOx™ by Nouryon for removal of micropollutants from wastewater. After the trials further research gave us important insights into the costs of both our solution and that of our main competitor, ozone.

Micropollutants such as pharmaceuticals, hormones, and antibiotics in water is a present and growing problem because of their persistent nature and through increased and more widespread use. They can have large negative effects on ecosystem and human health and famous examples of this are the reports by WHO that antibiotic resistance is going to be a bigger threat than cancer by 2050; male fish developing female attributes after exposure to hormones; and behavioural changes in aquatic life after exposure to antidepressants.

Advanced Oxidation Processes is the breakdown of micropollutants with hydroxyl radicals (OH•). In the case of UV-C light and hydrogen peroxide (H2O2) the hydroxyl radicals are formed through homolysis, meaning equal separation, of H2O2. The hydroxyl radicals have the second highest oxidation potential, second only to fluoride, and react with and break down organic micropollutants within milliseconds. At full oxidation only carbon dioxide and water remain, but more commonly there will be remaining transformation products which are widely regarded to be less toxic and more biodegradable than the original compound. Since UV-C light is used there is also a second breakdown effect in the form of direct photolysis, meaning separation by light, which can have a significant impact.

In 2019 we performed pilot research with UV-C light and H2O2 at Sundet Wastewater Treatment Plant in Växjö municipality, Sweden, for Advanced Oxidation with focus on removal of pharmaceuticals, hormones, and antibiotics. The UV-C light came from the Advanox™ reactor by Van Remmen UV Technology, and the hydrogen peroxide in the form of MicrOx™ by Nouryon.

The pilot research was done in two types of trials: a ‘dose response trial’ that used different UV-C and H2O2 doses to test the performance under different settings but on the same water composition, and two ‘long trials’ that ran continuously with automatic process control to further analyse the performance as well as any ecotoxicological effects. The micropollutants that were selected for analysis were based on recommendations from the Swedish Environmental Protection Agency (Naturvårdsverket), and all analysis was performed by IVL Swedish Environmental Research institute (IVL Svenska Mijöinstitutet).

The trials were performed in the ‘Advanox™ pilot’ which contained among other things a full-scale Advanox™ reactor at 40-200 m3/h capacity, dosing equipment, and catalytic filter beds for removal of residual H2O2.

The ‘dose response trial’ showed that there was a clear increase in removal efficiency with increasing UV-C and/or H2O2 dose. At Sundet WWTP >70% removal was possible on average already at the lowest dose settings tested, 5000 J/m2 UV-C and 20 ppm H2O2, and up to >93% removal was possible on the highest dose setting tested, 12500 J/m2 and 40 ppm H2O2.

The ‘long trials’ showed that during continuous operation the performance was similar to the ‘dose response trial’ and on average the removal efficiencies were only a couple of %-units away. Three types of ecotoxicology tests were performed: green algae, crustaceans, and bioluminescent bacteria. The ecotoxicology effects showed to be low to negligible for green algae and crustaceans, and negligible for the bioluminescent bacteria. Because green algae and crustaceans cannot be tested at 100% solution due to them needing nutrients during the test, the lowest effect it can be classified as is low to negligible.

The main competitor to UV-C and H2O2 is often viewed to be ozone. There are several performance based reasons to use UV-C and H2O2 instead of ozone: the two breakdown mechanisms in both photolysis and oxidation rather than just oxidation; no risk for bromate or NDMA formation when the precursors are present; and even when a low UV-C dose for AOP is used (e.g. 5000 J/m2) it is still more than 10 times the NEN-14897 standard for disinfection of drinking water, while if applying a low ozone dose there is a risk for incomplete disinfection. 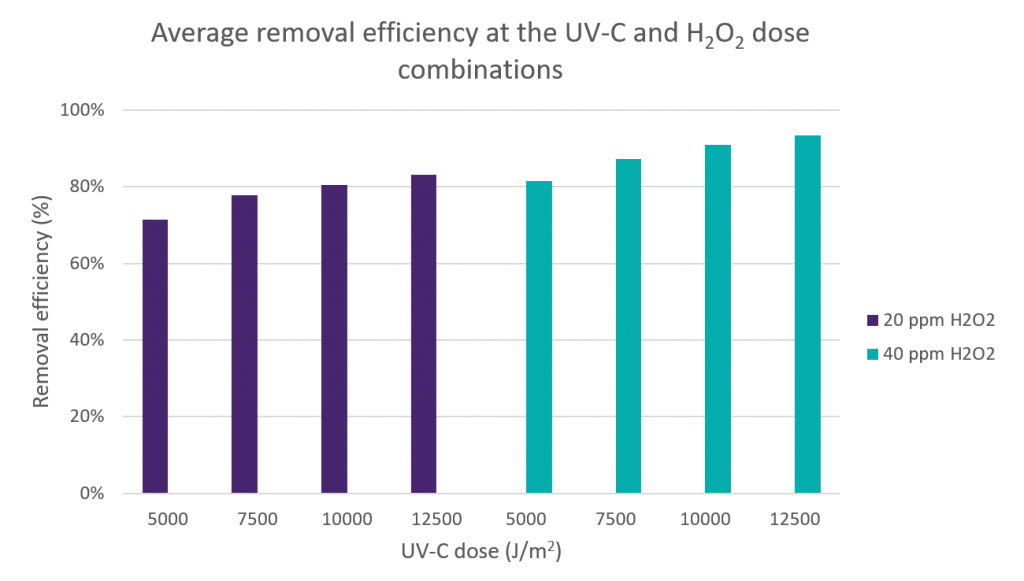 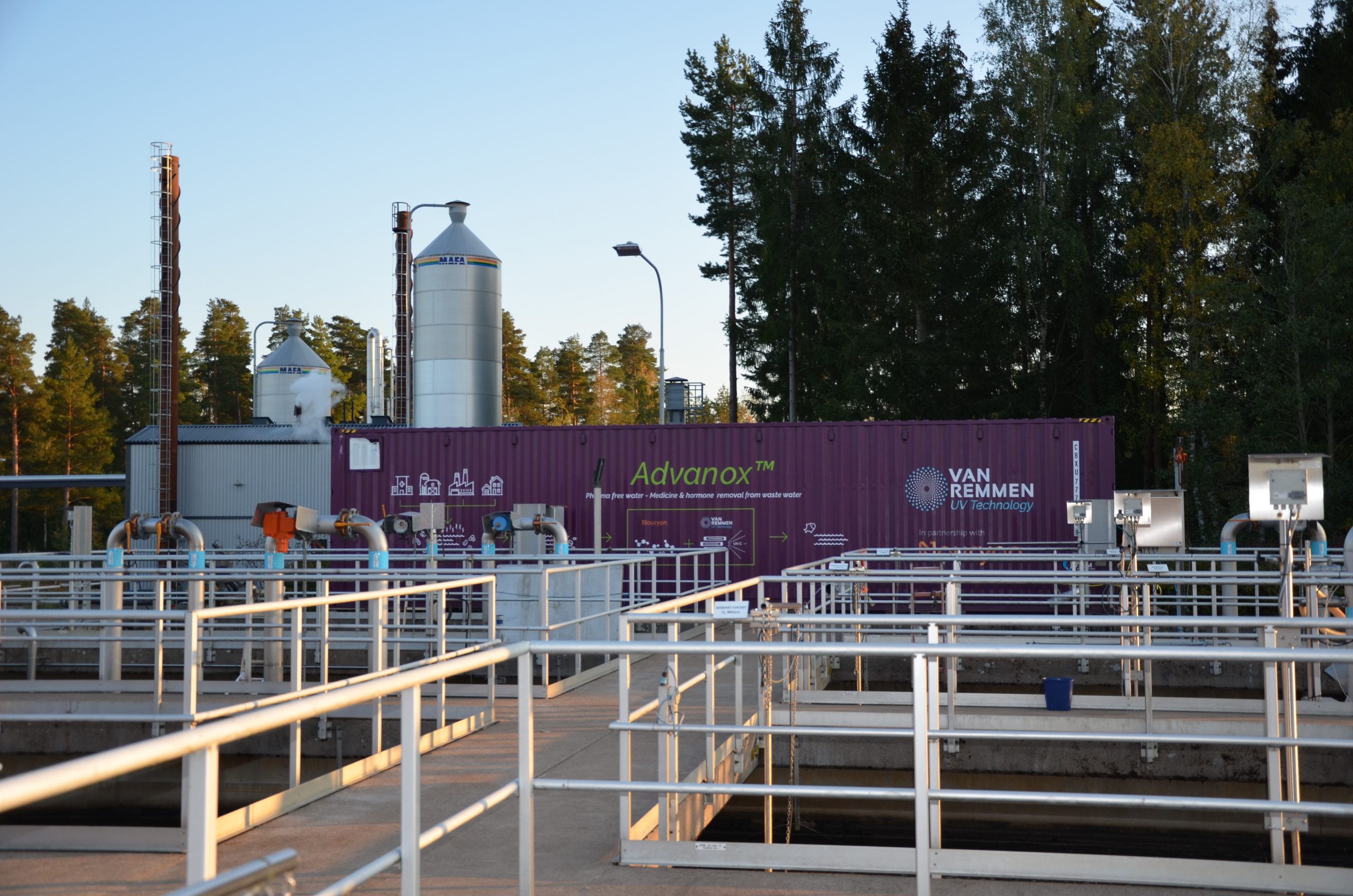