One of Europe’s largest vacuum systems and certainly the largest vacuum sewerage system in Slovenia has commenced operation in the Municipality of Brezovica. The system will have 6 Vacuum Pump Stations and over 1,500 Flovac valves.

The municipality is located just south of the capital Ljubljana, in central Slovenia. It has a population of about 9,500 people. It is known for its famous marshlands which is why a vacuum system was chosen as the principal form of sewage collection for the region.

As all vacuum pipework is installed in shallow trenches, contractors were able to avoidConstruction work near the Vacuum Pump Station dewatering to a large extent allowing construction time to be shortened extensively. This meant that there was a lot less impact on local residents who could still go on with their daily chores without disruption. It also meant that when severe cold weather occurred then workers were not impacted for long periods of time.

A gravity system would have required dozens of gravity pump stations due to the high water table while only 6 Vacuum Pump Stations were needed. This has reduced the energy cost of the system and also reduced the maintenance cost. As the area sometimes suffers power outages the ability to have back-up generators at each station for unrestricted service for home owners. The Vacuum Pump Stations have both duty and standby pumps and are fully monitored back to base.
All 6 stations and all 1,500 vacuum valves are also monitored via the Flovac Monitoring System using a cable FLbus system which allows operators to see exactly which valves are operating in the network and if any infiltration is occurring. 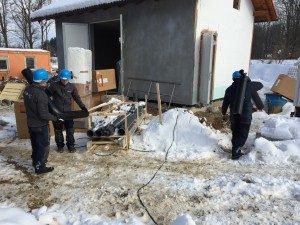 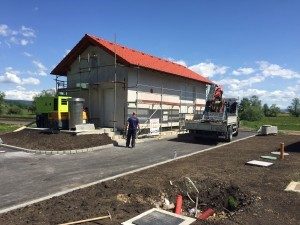