Last week (April 3) the Water Alliance took part in a trip to Las Vegas, USA, organized by WTC Leeuwarden. Specifically, the Leeuwarden delegation, led by municipal alderman Henk Deinum (in charge of economic affairs), was in the US city to attend the general assembly of WTCs. This major business event will be held in Leeuwarden in 2018. The official handover of the organization for 2018 was done in Las Vegas. That happened during a grand gala, part of a three-day conference, in the Paris Hotel on the Las Vegas Strip.

The 2018 event will be in April. Hundreds of participants will then come to the Friesian capital from a variety of WTC organizations around the world. Water will be an important theme at the 2018 event.

During the WTC conference in the USA, Water Alliance Director Hein Molenkamp arranged a special water technology meeting with WaterStart in Las Vegas. WaterStart is a cluster organization comparable to the Water Alliance for the state of Nevada, of which Las Vegas is the capital.
The state of Nevada faces numerous challenges when it comes to water. Las Vegas lies in the midst of a desert-like region, where water is scarce. Via WaterStart, a new programme was launched to initiate a worldwide search for new, innovative technologies that can help the rapidly expanding city manage its water use more intelligently.

The Dutch delegation numbered six members, all involved in the Water Alliance’s Leeuwarden-based water cluster. Alderman Henk Deinum, speaking on behalf of the Municipality of Leeuwarden, made clear just how important the Water Alliance is for strengthening the economy of the region. Nathan Allen, Director of WaterStart, indicated that they had been established on similar grounds two years ago and are financed by both the City of Las Vegas and the state of Nevada. They stimulate creation of new enterprise in the domain of water technology and develop in partnership with a variety of stakeholders solutions to the challenges they face. To do so, they take a good look at the technology available in the world.

After the meeting was an excursion to one of Las Vegas’s two large drinking water production locations. The River Mountains Water Treatment Facility is part of the Southern Nevada Water Authority (SNWA). This impressive water treatment facility pumps its water up from Lake Mead, which is located nearby, and supplies drinking water to the City of Las Vegas and elsewhere.

Concrete business deals were also made. For instance, Wafilin Systems, which is based at the WaterCampus Leeuwarden, will soon in collaboration with Westra Stainless Steel from the Friesian Elahuizen, build a first facility for a textile laundering firm in Las Vegas. Wafilin developed a membrane technology that enables the re-use of hot water streams in industrial laundering processes. The technology was developed a few years back, with the support of a Fryslân Fernijt stimulus grant. At the time it was tested at “De Blinde”, a textile laundry company in Heerenveen. The results of that testing period confirmed that washing and re-using, aided by so-called ceramic membranes, saves substantial energy and water.

The system is currently being readied for transit. In the course of May it will be installed at the client’s premises, a textile laundry in Las Vegas. 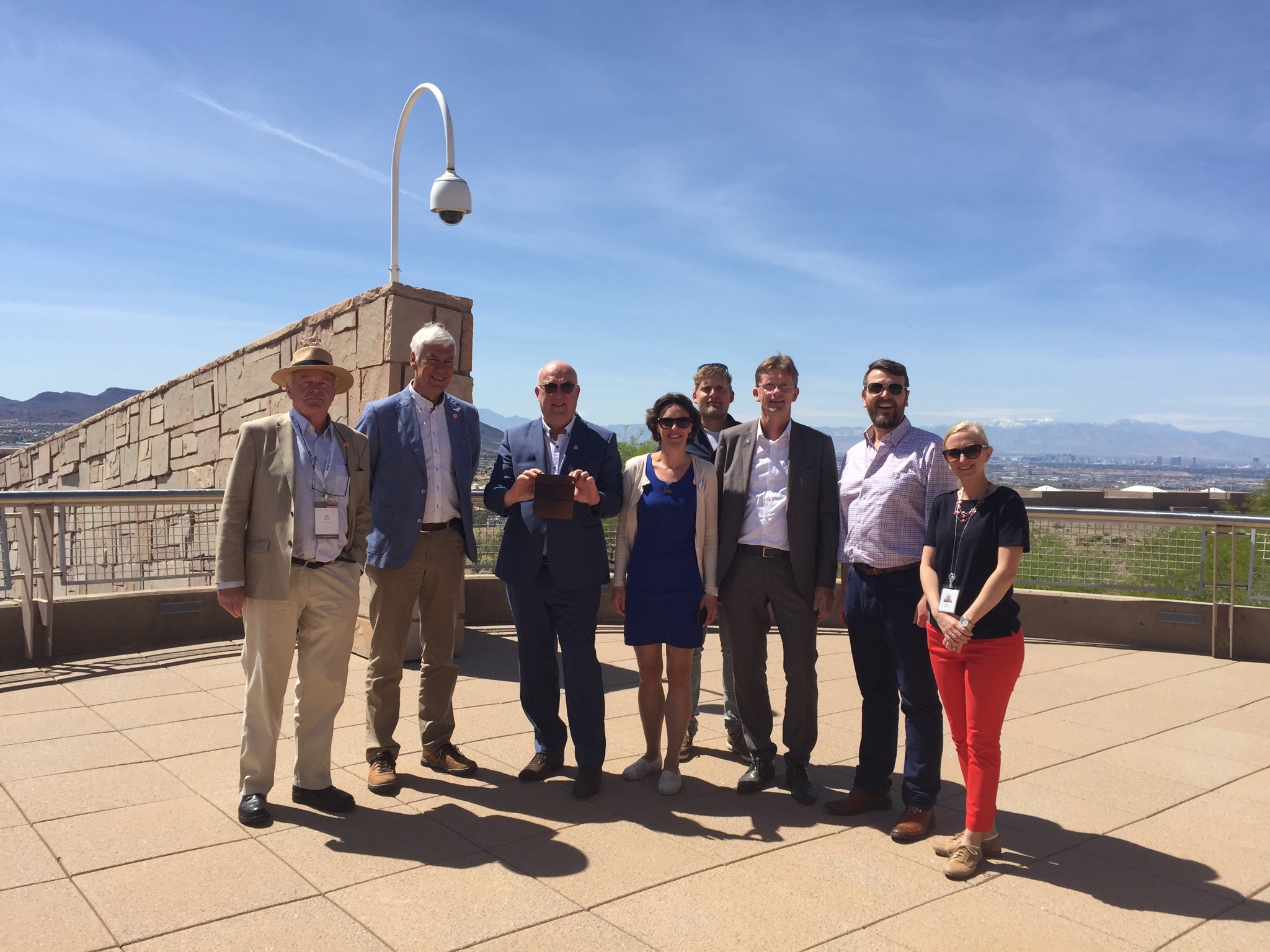