Holland Water once again managed to acquire a considerable amount of orders in Dubai, working together with Culligan: their partner in the United Arab Emirates. The contracts were signed on Tuesday, October 23 at the WETEX Exhibition in Dubai.

Peter van der Linde, Holland Water’s director, is very satisfied with these exceptional orders. ‘The international competition has been brutal, but the strong position of our partner Culligan in this region, the intensive cooperation between our companies and the proven quality of the Bifipro® system have contributed to the fact that we can now be labeled as a key supplier’, he says.

The Holland Pavilion, which made its appearance again at the Wetex in Dubai this year, is sufficiently bigger than during the previous editions. This is mainly due to the fact that it is also used as a platform for the Dutch EXPO 2020 campaign. For the first time, the Holland Water Bar (also physically equipped with a Bifipro® system) will be a central point to the connecting role that the Netherlands is aiming to play in the areas of water, energy and nutrition.

Holland Water’s position is becoming increasingly stronger outside the Netherlands and is particularly successful in the Gulf region with its Bifipro® system. Over the past few years, a great deal has been invested and the company has put its emphasis on the importance of quality. ‘It was about two and a half years ago when we started in this region. There was only little structure in the market and people were mainly looking for cheap systems in order to outperform the competition’, Peter van der Linde states. ‘We have continuously emphasized that cheap is expensive to buy. After all, when a system is installed that is perhaps cheap but does not work or works insufficiently, problems arise. And they can be disastrous in the case of Legionella.’

Besides that, many market parties appear to have insufficient in-house knowledge to understand the often complex drinking water installations. Fortunately, Holland Water and Culligan have a solution to this. ‘We can even monitor and adjust all of our systems from a distance, including those in the Gulf region. This feeling of security is also important for the tourist sector, the economic motor of the UAE’, van der Linde says. ‘Similar to in the Netherlands, we deliver real added value. We provide clean water, focus on less energy and water consumption and eliminate the risks of Legionella infections.’ 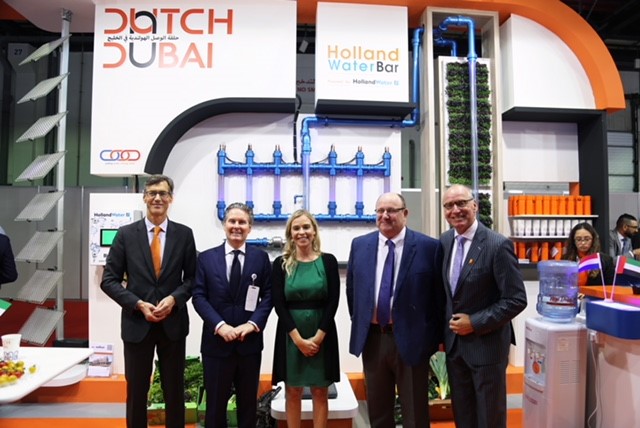